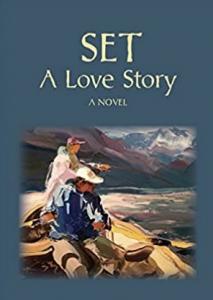 Plank Productions to Produce Feature Film “Set: A Love Story” Based on Novel by Karen Dodson and Directed by Jeni Jones

“SET” is about gaining self-confidence through the mastery of fly-fishing and about finding refuge and comfort in the rugged, natural world.”

LOS ANGELES, CALIFORNIA, UNITED STATES, October 17, 2022 /EINPresswire.com/ — “SET: A LOVE STORY,” based on the best-selling novel by author Karen Dodson, is a female-driven feature film set in the world of fly-fishing. Arriving on the heels of the 30th Anniversary of the classic “A River Runs Through It” starring Brad Pitt, this modern, female centered film offers a fresh perspective on fly-fishing, one of the most beloved pastimes in the world. Taking place against the magical, vibrant backdrop of Patagonia, Argentina, “SET” is the story of one person’s timeless quest for love, culminating in an epic journey of self-discovery. “SET” is about gaining self-confidence through the mastery of fly-fishing and about finding refuge and comfort in the rugged, natural world.

Jeni Jones is set to produce via Plank Productions and will direct the film based on her adaptation. Jeni is an award-winning film and theatre director, producer, screenwriter, and rapper, known for her direction of the NAACP Theatre Award-winning “Women on the Verge.” Recently, she directed the award-winning film “Club Rat$,” which was used to raise money for RAINN (Rape, Abuse & Incest National Network). Throughout her career, Jeni has worked as a film executive at Starz Media, The Film Department, and Exclusive Media, during which time she has been acknowledged for creative contributions to films such as “Law Abiding Citizen” starring Jamie Foxx & Gerard Butler, “End of Watch” with Jake Gyllenhaal, “Snitch” with Dwayne Johnson, “Parkland” alongside Tom Hanks’ Playtone, and Golden Globe-nominated “Rush” starring Chris Hemsworth and directed by Ron Howard, to name a few.

The picture “SET” will be Executive Produced by the book’s author Karen Dodson, whose primary career path has been biomedical journalism, biomedical publishing, management, public affairs, journalism, marketing, and postgraduate-level teaching. A former competitive figure skater, Karen loves outdoor adventure and was inspired to write the novel “Set: A Love Story” after her many fly-fishing and hiking experiences in the Patagonia region of Argentina. Her second novel will be published in 2023.

Ron and Vanessa Sorensen will Executive Produce and consult under Chocolate Lab Expeditions, one of the most respected outfitters in Argentina. Chocolate Lab Expeditions was featured in the movie “Rise” by Confluence Films. Ron has been covered by Columbia Country’s televised “Fishing The West,” and “Fly-fishing and Tying Journal,” as well as numerous articles in respected fly-fishing publications. Ron is on the Pro-Staff of Scott Rods & RO Drift Boats, and he and Vanessa started the Argentina branch of RO Drift Boats. In 2022 the Sorensens completed their dream to open their own lodge in Patagonia: Limay River Ranch. The lodge is located on an 80,000 acre property and will be one of the locations used in the film.

Music Supervision will be handled by Bruno Scudiere of Jambo Tree Music & Films. Born in Rio De Janeiro, the birthplace of Samba and Bossa Nova, Bruno has had a long, distinguished career in the music industry, holding a variety of roles all over the world. His vast knowledge and passion for music of all genres, have allowed Bruno to build Jambo Tree Music & Films into the respected, worldwide company it is today. With a global roster of artists, singers, composers, and labels, Jambo Tree has worked with clients such as Netfilx and ESPN.

“SET: A LOVE STORY” is currently casting and set to begin production in the United States and in Argentina during 2023. Filming will take place on the water and at various resorts, including the brand new Limay River Ranch, owned and operated by the Sorensens.

The independent film will be used to raise money and awareness for environmental preservation and as an international co-production with a positive life-affirming message, “SET: A LOVE STORY” is intended to foster cross-cultural unity, international co-operation, and peace.

Jeni Jones will attend the upcoming AFM as a representative of Plank Productions with a full slate of original, female-driven feature films.