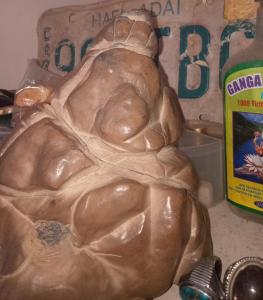 From ancient Hindu texts Mahabharata & Ramayana to the Chinese epic Journey to the West, Hanuman and Sun WuKong are admired for His robust, faith & self-control

Not only Yoga & Qigong are alike, Chinese devotees also recognize that Hanuman is one potential inspiration for Sun Wukong, the Monkey King character in the Chinese epic adventure Journey to the West.”

KUALA KRAI, KELANTAN, MALAYSIA, December 13, 2022 /EINPresswire.com/ — Park Soul Om is a Hanuman Mandir in Kuala Krai, Kelantan, Malaysia, and is an ancient yoga retreat now under refurbishment. Hanuman is recognized as one of the five greatest yogis of the Mahabharata days. Park Soul Om, which has a self-manifest idol of Hanuman. The icon in the temple, is devotionally worshipped as “Sri Hanuman Ji Maharaj” . Chinese devotees recognize that Hanuman is one potential inspiration for Sun Wukong, the Monkey King character in the Chinese epic adventure Journey to the West.

Hanuman (/ˈhʌnʊˌmɑːn/; Sanskrit: हनुमान, IAST: Hanumān),also known as Anjaneya (Sanskrit: आञ्जनेय), is a Hindu god and a divine Vanara companion of the god Rama. Hanuman is one of the central characters of the Hindu epic Ramayana. He is an ardent devotee of Rama and one of the Chiranjivis. Hanuman is regarded to be the son of the wind-god Vayu, who in several stories played a direct role in Hanuman’s birth,and considered to be an incarnation or son of Shiva in Shaivism. Hanuman is mentioned in several other texts, such as the epic Mahabharata and the various Puranas.

Evidence of devotional worship to Hanuman is largely absent in these texts, as well as in most archeological sites. According to Philip Lutgendorf, an American Indologist, the theological significance of Hanuman and devotional dedication to him emerged about 1,000 years after the composition of the Ramayana, in the 2nd millennium CE, after the arrival of Islamic rule in the Indian subcontinent. Lutgendorf also writes that the skills in Hanuman’s resume also seem to derive in part from his windy patrimony, reflecting Vayu’s role in both body and cosmos. Bhakti movement saints such as Samarth Ramdas have positioned Hanuman as a symbol of nationalism and resistance to persecution. The Vaishnava saint Madhava said that whenever Vishnu incarnates on earth, Vayu accompanies him and aids his work of preserving dharma. In the modern era, Hanuman’s iconography and temples have been increasingly common. Hanuman is viewed as the ideal combination of “strength, heroic initiative and assertive excellence” and “loving, emotional devotion to his personal god Rama”, as Shakti and Bhakti. In later literature, he is sometimes portrayed as the patron god of martial arts such as wrestling and acrobatics, as well as activities such as meditation and diligent scholarship. Hanuman symbolises the human excellence of inner self-control, faith, and service to a cause, hidden behind the first impressions of a being who looks like a Vanara. Hanuman is considered to be a bachelor and an exemplary celibate.

The Kuala Krai district is a landlocked district in the centre of the State of Kelantan in northeastern Malaysia. The land is hilly, and before the 20th century, the entire area was tropical rainforest. The territory contains the confluence of two major rivers, the Lebir, and Galas, to form the Kelantan River, which then flows some 70 km northwards through one of the most densely populated flood plains on the Malay Peninsula to its estuary in the South China Sea near the State capital of Kota Bharu. Given this unique geographic ecology, Kuala Krai is home to wild elephants (Ganesha). Lord Hanuman and Lord Ganesha are the two most popular Bhagawan taught by spiritual teachers in Hindu schools in UK and USA.


EIN Presswire’s priority is source transparency. We do not allow opaque clients, and our editors try to be careful about weeding out false and misleading content.
As a user, if you see something we have missed, please do bring it to our attention. Your help is welcome. EIN Presswire, Everyone’s Internet News Presswire™,
tries to define some of the boundaries that are reasonable in today’s world. Please see our
Editorial Guidelines
for more information.