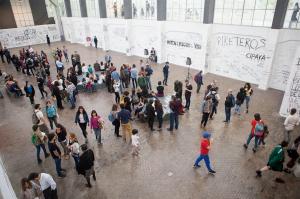 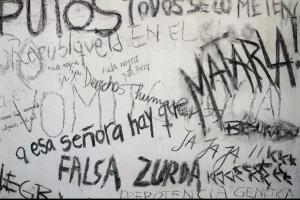 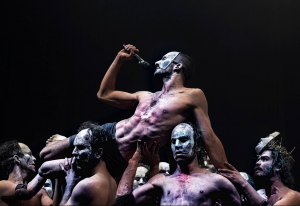 Kirchner is Argentina’s current vice president and past president (2007-2015). The gun failed twice, and the man was arrested.

Journalists and political commentators suggest that civil war might have broken out had the gun gone off. Argentinian’s political and cultural climate is acutely polarized, even from an American perspective.

Two Argentinian artists highlighted this acute polarization eight years ago in an artwork about hate speech, a lot of which was targeted at Argentina’s first female president, Cristina Kirchner.

In 2008 Roberto Jacoby (a pioneer of conceptual art) and Syd Krochmalny (an artist and the new director of BARRO New York) started researching the proliferation of hate speech found in the largest newspapers in Argentina (La Nación and Clarín).

In 2014 Roberto Jacoby and Syd Krochmalny created a visual installation of the hate speech concept in Argentina’s National Endowment of Arts (FNA). The artwork, Journals of Hate, is a gathering of words and phrases pulled directly from the “reader comments” of the newspapers, expressed first in a charcoal installation, then in a book of poetry, and later as a theatrical performance, “Diarios Del Odio.”

What shocked the artists in the creation of the artwork was the sheer volume of hateful comments published every day in every article.

The “reader comments” section was a feature made possible by the Internet and was meant to enable readers to express their views without boundaries. The chosen fragments specifically tracked discursive cores, many focusing on the dehumanization of different groups in society. A common thread in these groupings was the construction of the “Other” as objects of extreme hatred, often defining certain people as social surplus. ‘Garbage,’ ‘trash,’ and ‘waste’ were metaphors used to describe the ¨other side¨ as excrement that the social body must be expelled. This embodied view of society also appeared as medical terms such as ‘cancer,’ ‘infection,’ or ‘gangrene that must be removed.’

“The haters” used objects to define and label the identity of “the hated.” The commenters labeled “the others” as common derogatory names such as “bolita” (Bolivian), the “paragua” (Paraguayan), the “perucho” (Peronist, or believer in the economics of Juan Domingo Peron, a past president of Argentina who was in favor of the working class), and other derogatory categories. Some commenters denigrated people of color, women, or the LGTBQIA+ community. Some commenters entitle themselves as “educated” while stigmatizing “the uninstructed,” or aligned with the “middle class” while degrading “the poor.”

These observations do not say anything new. Some could say that the comments selected were nothing more than anonymous rants. But should it be noted that many of the biggest massacres in history were preceded by dehumanizing discourse and public narratives that went unheeded?

A week ago, one person almost assassinated Cristina Kirchner, an event that was repeatedly antagonized by the haters lurking in autonomous corners of the reader comments of newspapers.