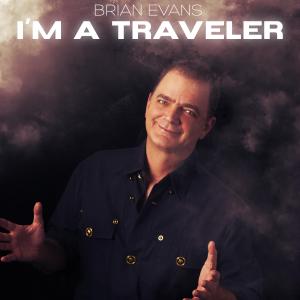 LOS ANGELES, CA, USA, April 17, 2022 /EINPresswire.com/ — Brian Evans, the crooner who has opened for numerous stars such as Bob Saget, Joan Rivers, Social Distortion, Louie Anderson, David Spade, and the list goes on, will release his single “I’m A Traveler” to adult contemporary radio and smooth jazz stations across the nation on April 20th through ESW Management.

The song, “I’m A Traveler,” which Evans wrote, is produced by Narada Michael Walden, the legendary producer behind Whitney Houston, Aretha Franklin, George Michael, and others known the world over.

Evans has performed in Las Vegas for many years, and has also written several novels including “Horrorscope,” “The Funny Robbers,” “Savannah,” and has seen the first novel adapted by Westwind Comics recently into a graphic novel.

His rendition of “New York, New York” has received over 500 million streams on the social media network TikTok, and with his combined music videos on YouTube, Evans videos “At Fenway” featuring William Shatner, a song about the Boston Red Sox, “A Beautiful Game” featuring Lou Diamond Phillips and “Breaking Bad” star RJ Mitte honoring the sport of soccer, and his Halloween themed song “Creature at The Bates Motel” among other videos have garnered him more than 50 million views on YouTube. His version of “Witchcraft” alone, performed during a live concert on Maui, where he founded and produced The Maui Celebrity Series, has received more than 6 million views alone.

Evans took to writing books for the last eight years following the unexpected loss of his mother, Helen, following knee surgery and had not performed for several years.

“There’s a combination between his “Horrorscope” project and a live concert special on a streaming network.”

Evans named as one of the most relevant crooners by Grammy Magazine of his generation, is starting to sing again, and “I’m A Traveler” is what he considers to be his own personal anthem. He is considering performing in Las Vegas again.

“I’m opening for people right now, but I’m getting there.”